We are all back from Kansas City, where we held the 7th annual CQI Retreat. This year the retreat was held from Wednesday September 10 through Sunday morning, September 14.  Twenty-eight women registered, but only 26 were able to make it (dear Barb W became ill at the last moment. But she is well now, thank goodness. And Josie Trevino had a serious fall in which she broke her ankle).

Our venue was The Heartland, a retreat facility in Parkville, Missouri about a 10 minute drive from the Kansas City International airport.  Some ladies arrived by plane, some drove, and a couple even took a train.

The grounds of The Heartland were beautiful.  It was cloudy most of the time we were there, but the sun came out for us on Saturday, and made up for lost time.


We ate our meals in the dining room, a short walk away in a neighboring building. Meals were served buffet style and we had the basic beverage choices of water, coffee, tea and lemonade (and milk upon request).

This was the main hall where we did our stitching, held classes and activities and generally spent all our time when we were not sleeping or eating.   This first picture is taken from the entrance way, looking south across the room.  The stitching tables were on the far end, arranged so that the women could stitch together in large groups.  On the nearmost right side is a round table (and a white board not pictured) that we used primarily for classes, but also for displays as needed. 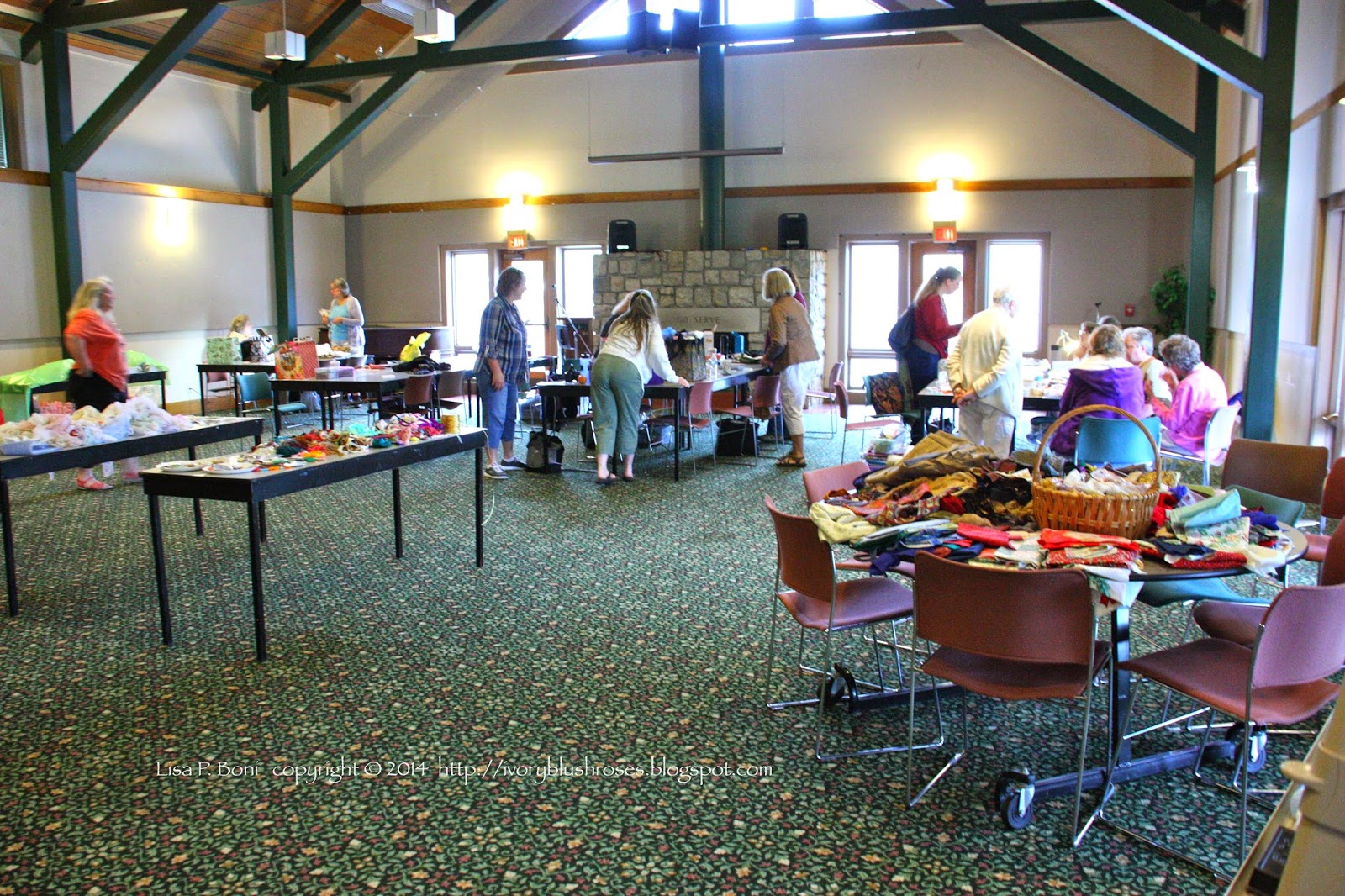 This is a view of the room from the other corner (looking in the same direction), and at night.  In the foreground are vendor tables that we kept set up permanently.  When the vendors took off their covering tablecloths, it meant their shop was open.  Lots of S.E.X. (Stash Enhancement Xperiences) available! 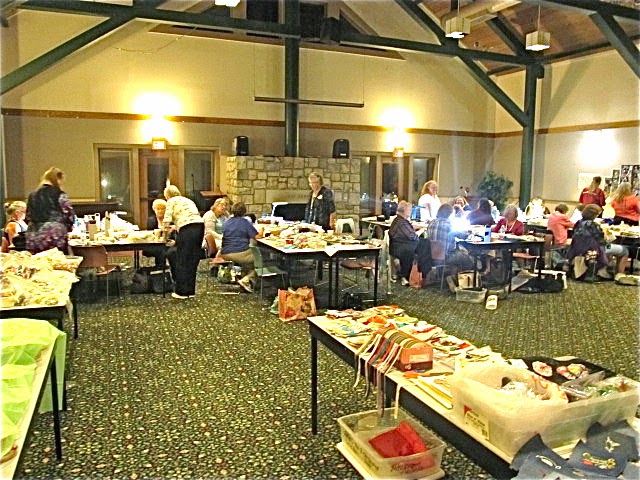 Attached to our big stitching room was a kitchen where we kept our snacks out. They also had coffee and a refrigerator for our use.  It came in handy - we had to keep our stitching strength up!!!  We had chocolate, peanuts, chocolate, fruit, chocolate, pretzels, and chocolate.
We didn’t seem to get many good pictures of the Swag Bags, but they included generous donations and samples from many vendors.  Some of them included Vintage Vogue, Pellon USA, Ribbonsmyth, Colour Complements, as well as many member Etsy store vendors. 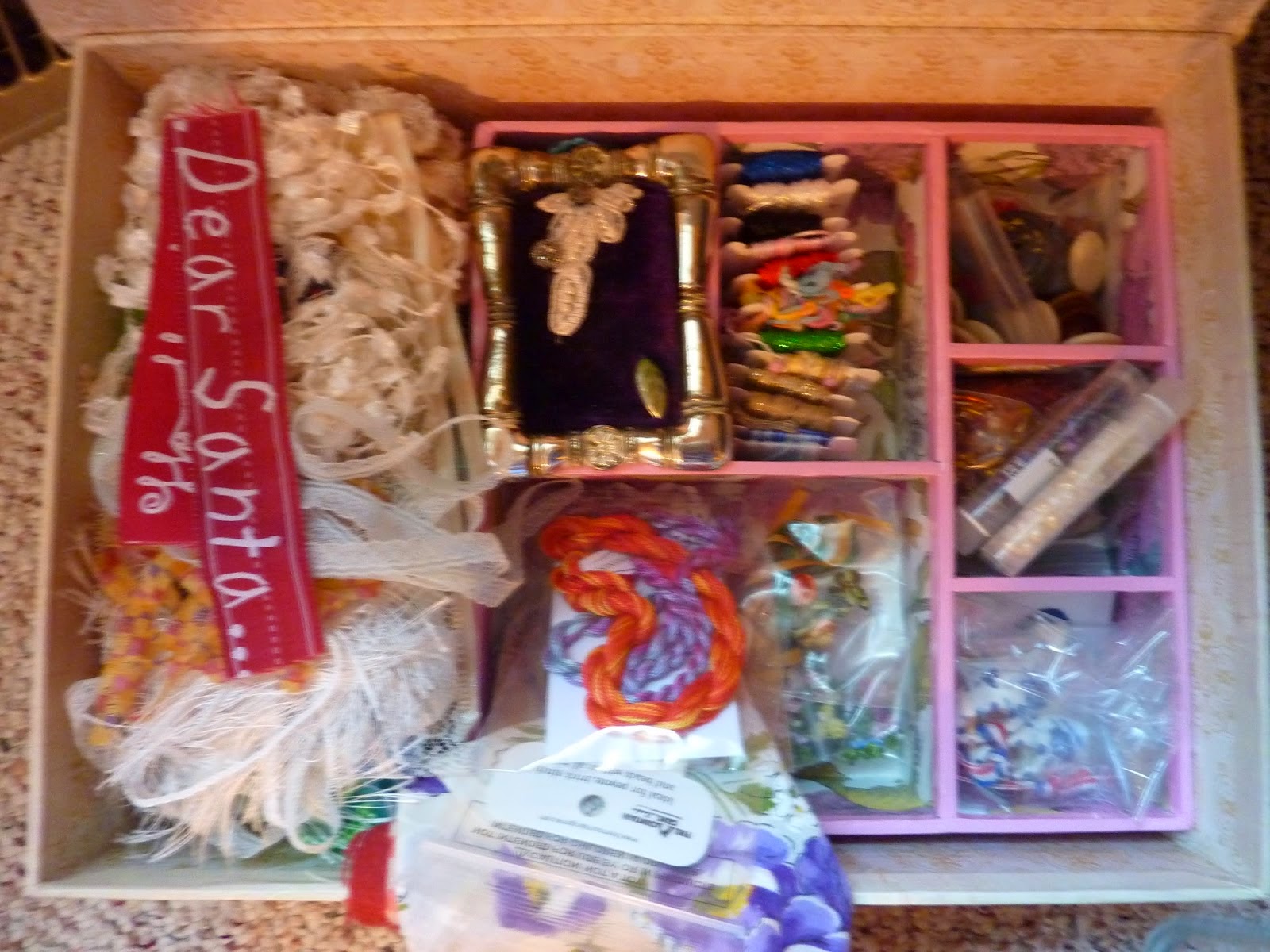 In addition to the lovely supplies donated, there were several finished products, like these wool pincushions made by Josie Trevino and Barbara Warner. 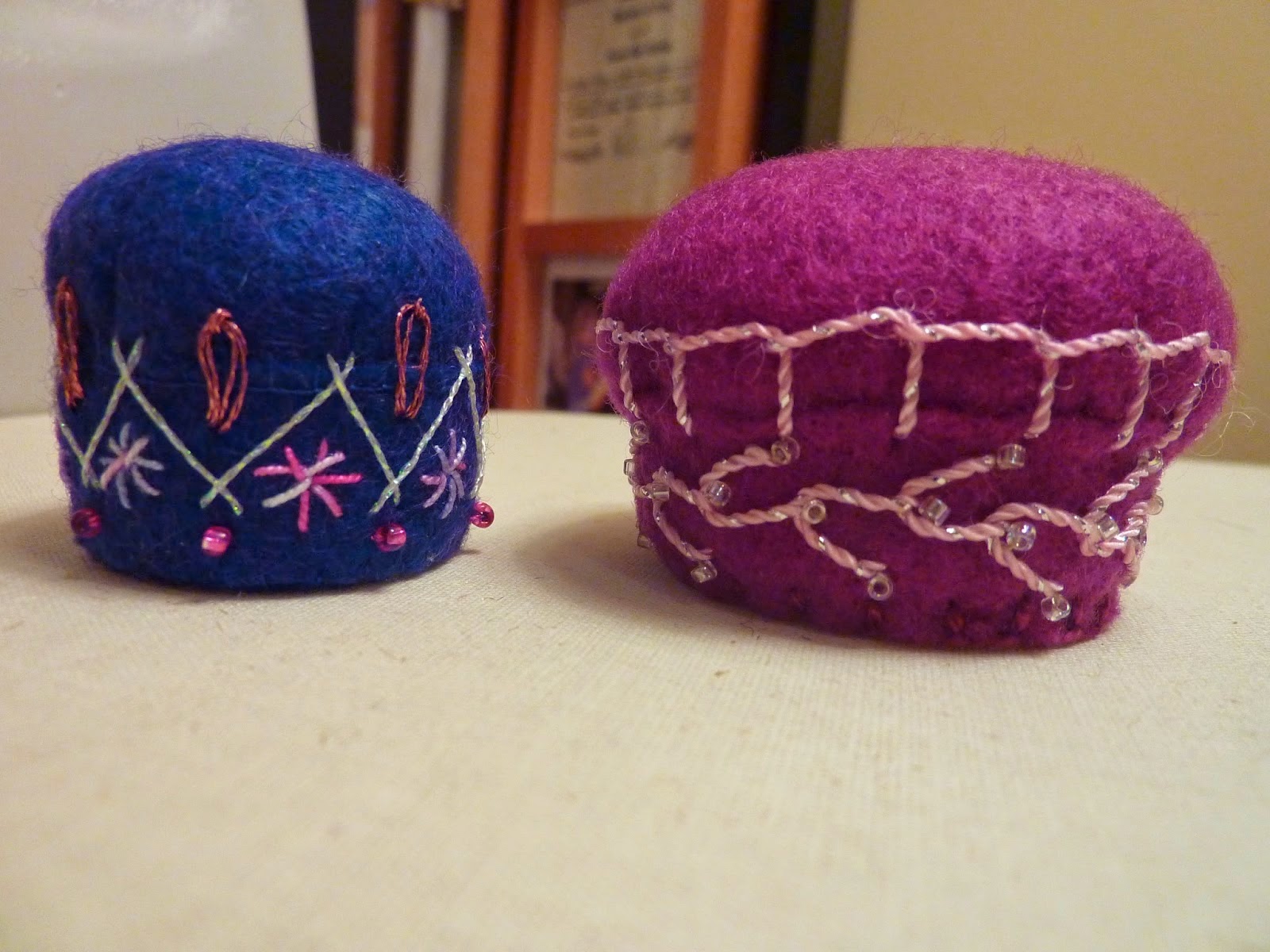 On Wednesday evening after dinner, we did introductions, then played some games like CQ Bingo, CQ Anagrams, CQ Madlibs and a CQ Word Search.  Most of us were tired from travel, so it was an early night, relatively speaking.

But the next morning, Thursday, were up and ready to get going right after breakfast. The first activity was the Stash Dash. Many of the women brought (or mailed ahead) unwanted stash.  The stash dash used to be just fabric, but has grown over the years. This year`s Stash Dash was the best ever, and was spread out over 4 tables. In addition to fabric, there was lace, silkie prints, trims, buttons, beads, miscellaneous sewing supplies and notions, and even some silk flowers.

Once it began, there were women everywhere with scissors and bags. There was no running with scissors or arguing - everyone was so calm and well behaved. Probably because the veterans of CQ have so much stash already, that it was much easier to let the newer stitchers get theirs first.  :-)

The lace and silkies (picture prints on silk or cotton) table was very popular, and in the end was reduced to less than a handful of items. 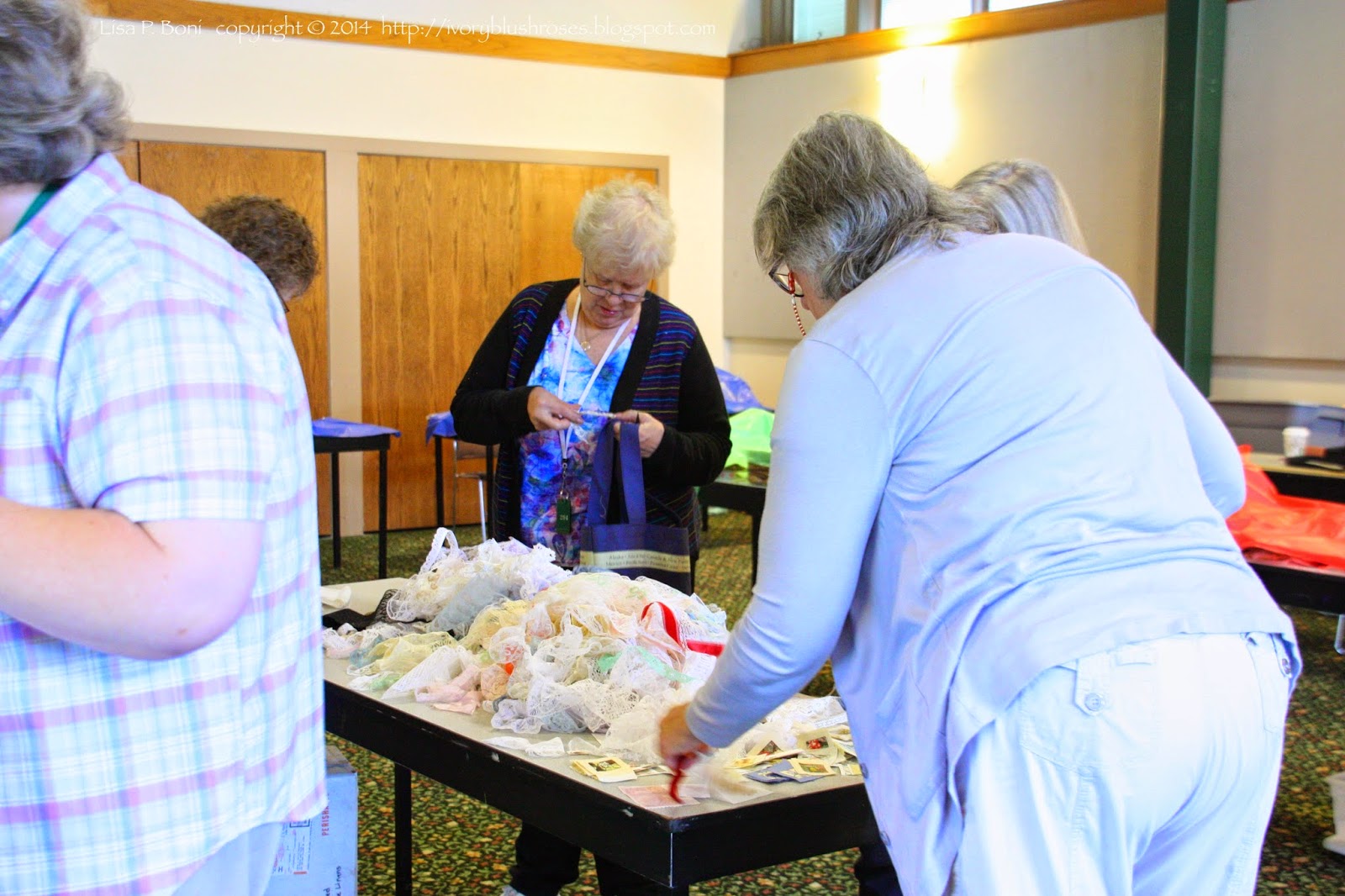 Most ladies were quite happy with their newly-acquired booty! 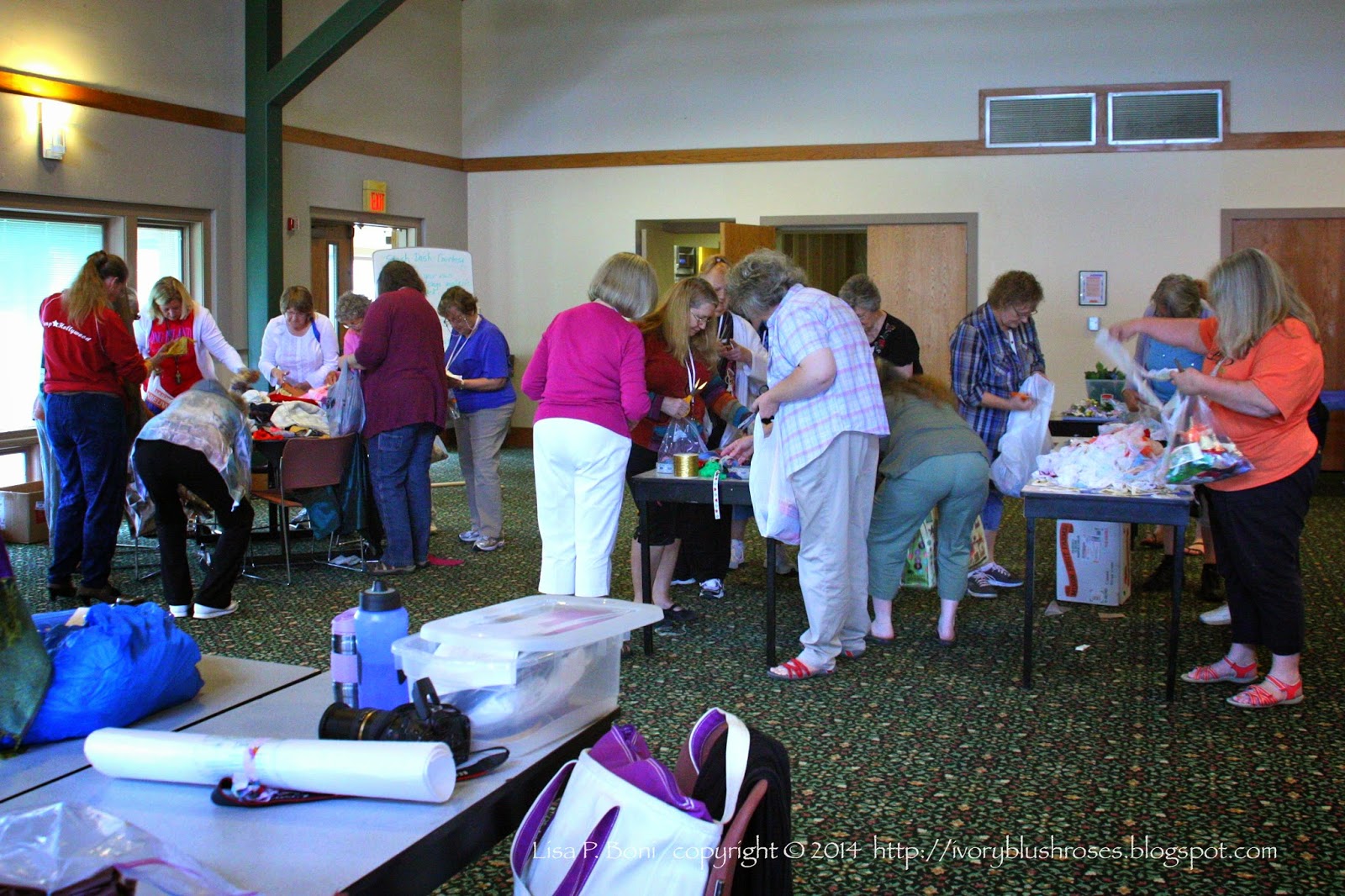 Because so many of our members were not able to attend, the Moderators of CQI have planned a giveaway for everyone to participate in this week (except those who attended the Retreat, LOL). We have three great prizes to give away. 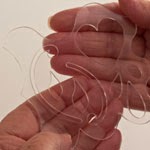 Here is the first prize we will award:  A set of Crazy Quilting Templates from Sharon Boggon of Pintangle. The winner will receive not only the templates, but an e-file containing the accompanying booklet of instructions and designs.

HOW TO ENTER:  Just leave a comment below about the retreat, the post or CQI. Make sure your comment has your name and a working email address so we can contact you if your name is drawn.  If you are not linked, then type your email address in your comments: name (at) email (dot) com.

We will draw a number by Random Number Generator on Tuesday evening. The commenter with the corresponding number will be the winner. The winner will be announced here on the blog on Wednesday morning.   At that time, we will also have the Part Two retreat post and announce a new giveaway!  Although you may enter every one of the 3 drawings, you can only win once! :-)  Good luck and thanks for dropping by!

The pictures show such a happy event. I live too far away to attend, but would dearly have loved to be there.

When people here in South Africa find out I'm learning to CQ here, their first question is why didn't you get involved with it when you lived in the US and could get all the supplies and support I needed. Well, when I lived in the US I raised 8 kids, went to back to university and got my degree, managed hotels, etc. I just didn't have time or energy. Now, I'm here in South Africa, no kids to raise, I don't work outside the home and I have all hours to spend on needlework and quilting. But just this once I wished that I was still just a few hours away from Kansas (I lived in Nebraska) so that I could attend the retreat with all of you. It would have been wonderful to put faces to names and learn from each of you. I'm so glad you had a wonderful time at retreat. Thanks for sharing the pictures. candy(at)data-recovery.co.za Candy Long.

I had to be in Las Vegas to help my daughter move to her new house or I would have considered attending the retreat. It looked to be a wonderful experience and get to know event. Donna at donnaabrams99@yahoo.com

I wish I could have attended, also but I live in canada. Looks like an amazing retreat.
Maureencsmith@shaw.ca

Sounds like you all had a wonderful time - what a nice way to get to know other Crazy Quilters. Maybe I will make it one year.

I am so sad that I wasn't able to attend this year's retreat (and won't be able to attend next year's either). I can't believe there wasn't any running with scissors during the stash dash!?!

At any rate, I would love to win the templates. Email is: juli.levine@gmail.com

Oh, how I wish I had been there! But sometimes life gets in the way.
Barb Warner

Hi! I am sure with such a wonderful group of ladies that you all had a great time. I have borrowed a friend's templates and they are wonderful and would like to win some for myself. Thanks.
Susan saam109@yahoo.com

It looks like everyone was having a good time. Thanks for sharing information about the retreat. Hope you are able to show some pictures of items people were working on. And thanks for a chance to win.

Am fairly new to CQ but am having a lot of fun learning and doing. Would love to attend a retreat but we just can't afford it :(

So wish I could have been there with you all however it was our 25th anniversary and we took a cruise to Alaska!

I've been crazy lately but not crazy quilting although I do lurk on CQI. I really need to finish up some crazy projects.

Looks like a good time was had by all. Maybe when I retire I'll get to one of the retreats.

I'm a lurker and thanks to Kathy Shaw's beginner class, I am new to actually stitching CQ. I enjoyed this post and would love to attend a retreat in the future.

Well, leaving a comment about CQI is easy...it's a wonderful group! The round robins are plentiful and varied...and the talent is astounding! I so wanted to make to retreat this year, but life just got in the way...looks like fun was had by all!
Hugs,
Kathy (aka shawkl)

Looks like all you gals had a fun time, stitching and friendship, they go together. Those who organized the Retreat did a great job, and these kinds of events take a lot of planning. The Crazy Quilt group online, is a wonderful modern way to keep in touch, aren't we lucky we live in a day and age where photos can be place in 'space' and everyone in the word can see them at a click on a keyboard? Sometime in the future, us West Coast Canadians and Americans, we'd like to have a retreat over here, maybe Nanaimo on beautiful Vancouver Island, our group of stitchers is growing, and give us a couple of years, and we'll host a retreat! Thank you for sharing the photos. It's ALMOST as good as being there.

So nice to see you all enjoying the retreat, such a happy number of CQ friends.
I laughed seeing you all with the delicious and enormous lunches.
Hope to see lots of you when you visited the 2015 retreat in Holland.
See you can't wait !!!

It looks absolutely wonderful Cathy! I wish I had been able to attend! Maybe next year though Ilys and I can come again., Do you have a location picked yet for it??

The retreat sounds like SO much fun! I am so glad so many of my CQI friends were able to attend. I hope to join you in 2016! Sharon is so generous, offering another set of templates for a drawing.

I have only just joined but I have really enjoyed reading everything and in particular, the retreat, I could almost feel the fabrics, picture silks etc that were on offer on the de stash table!
Love from June (Cross)

The retreat looks like everyone had a great time. I would love a chance to win a set of Sharon's templates. Mini ranch10@ aol.com

Wow, you lucky ladies! I would have loved to have attended and met you all. Thanks for the photos though, at least I can appreciate the fun.
Viv at edvigar@bigpond.com

Would have loved to have been there! I enjoyed the pics on the blog and can"t wait to see some eye candy
Debbie (Maine)
campmoxie@yahoo.com.au

Thanks for giving us a tour of all the people and events at the Retreat. I look forward every year to see the pictures. What a wonderful giveaway!!!
Linda in NM

This sounds like so much fun! I hope to join y'all some day. I'm new to CQ but my bee friends are the best. So inspiring, as are you!

beautiful area. Looks like you all had fun!
Maybe the templates will be mine

I am glad everyone enjoyed the retreat! My doc had other plans for me and I had to miss this one ...... Maybe next year! Josie in Texas

The stash dash looks incredible! Always one of the highlights of the retreat for me. Did the CQ stash fairy make an appearance? I know she barely escaped with her dress intact in Estes Park!

Wow, sounds like a very successful retreat. Such a pity that that so few stitcher were able attend. It is wonderful that those of us who couldn't attend are getting to participate in this contest. Thank you so much.